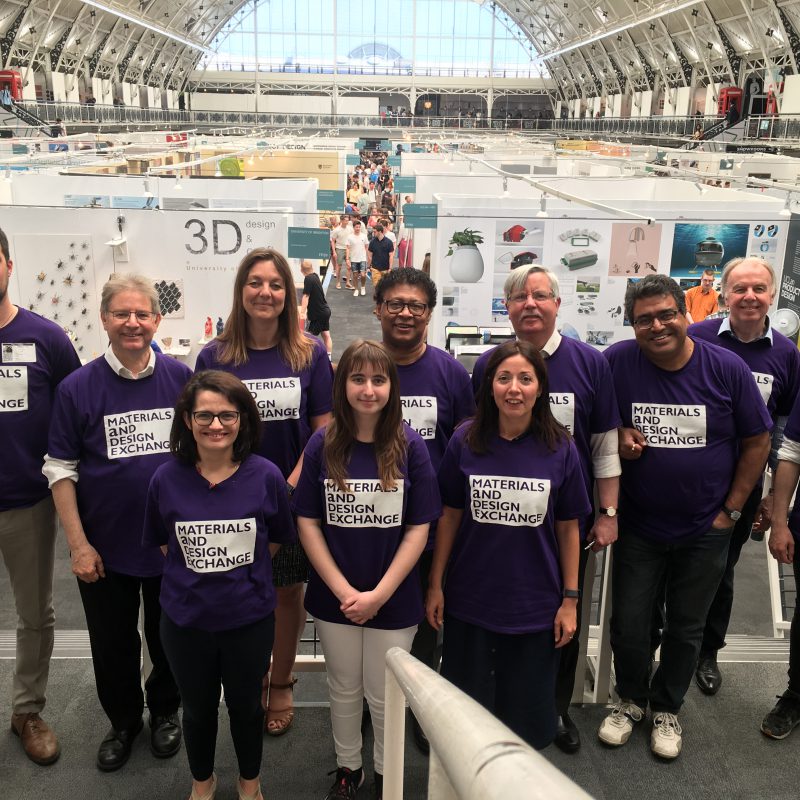 KTN, in partnership with UKCPN & MaDE, ran an event centred on the circularity of plastics at New Designers 2019.

On Thursday 4th July KTN, in partnership with the UK Circular Plastics Network and Materials and Design Exchange (MaDE), ran an event titled ‘Designing a Circular Economy: Innovative Responses for Re-Use’. The event formed part of New Designers 2019, a multi-day event targeted at new, innovative designers and one where they can showcase their university/graduate work. ‘Designing a Circular Economy’ provided an opportunity to bridge the gap between design and circularity and to see how design can influence greater recyclability in packaging or products.

Chaired by KTN’s Head of Design, Ed Hobson, who also provided an introduction to each of the speakers, the event featured four main presentations from the four speakers with an open Q&A session at the end which enabled strong audience interaction. Watch an interview with Ed from the conference here. Given the talks formed part of New Designers 2019, the audience had many students (both from schools and universities) in attendance. It was packed out, with additional attendees having to stand at the back – demonstrating the importance of environmental issues towards young people presently. Everyone was gathered to hear more on the overarching theme of how design can aid greater circularity.

Sally Beken, Programme Lead for UK Circular Plastics Network, set the scene by leading the audience through the 8 PRIF-funded projects which are currently being undertaken by 8 different universities. Sally additionally listed examples of innovative products which showcase how design can influence behaviour in moving away from single-use plastic. These examples included the GOMI Speaker, Garçon Wines and Skipping Rocks Lab – an organisation utilising seaweed as a replacement for plastic packaging.

Sally explained that the onus is on society to encourage greater circularity of plastics and pinned the blame on humans misusing plastics as a key detrimental factor in the gradual destruction of our environment. There is hope though, and this comes through greater understanding of how to use plastics to encourage further circularity – something which UKCPN is facilitating through conversations and potential collaborations at their events; Sally demonstrated some of the recent actions of the UK Circular Plastics Network, as well as future events including the UKCPN Roadshow events, such as in Manchester on 18th September. You can watch Sally’s presentation here, as well as an interview with her at the conference by clicking here.

Roy Cox’s (WRAP) talk focused on ‘Why design for recycling & re-use’ where he echoed Sally’s sentiments in explaining that “it’s not plastics that’s the problem, it’s the way we use them and discard them”. He ran us through the UK Plastics Pact and their aims, whose message is not anti-plastic, but instead focuses on the better use of plastics, for instance moving towards the use of PET & HTPE in plastic packaging so it can be fully recycled. You can watch an interview with Roy and his interpretation of the role design has in promoting greater plastics circularity here.

Matt Davies of the British Plastics Federation (BPF) led the audience through their ‘Recyclability by Design’ guide to help designers make products & packaging better for recycling. He explained the PVC Redesigned competition which BPF ran alongside the Institute of Materials, Minerals & Mining (IOM3) & MaDE which was open to 6 design universities in the UK. Watch Matt’s full presentation here and an interview with him from the conference by clicking here.

Matt’s talk was followed by Marie Bach Holm, CMF Designer at Envisage and graduate of the Royal College of Art (RCA), who discussed ‘Personal Plastics’. She explained her university activity where she fused textile design and recycling, then going on to creating a catalogue of plastic on display at the RCA. In her career she has also been examining the way in which we can utilise sustainable plastic materials in the manufacturing of vehicles, particularly in relation to the re-use of plastic once the original vehicle is no longer in use. Watch Marie’s interview here.

The Q&A session provided plenty of food for thought: one such query focused on methods to minimise pre-production plastic pellets from entering the ocean, with Matt Davies explains that 130 organisations have signed up to BPF’s Operation Clean Sweep. There was a question from the audience on how to get into sustainable materials industry; Matt explained that brands are more focused on sustainability and their environmental footprint than ever before and are therefore looking for more staff than ever to achieve greater circularity due to a public awakening on sustainability issues.

Another audience member challenged the panel on whether there is drive from industry to make organisations be more transparent with the types of materials that are going into products. Roy explained that the UK Plastics Pact released guidelines on 16th July for companies on the hierarchy of utilising plastics in packaging, while Matt assured the audience on the very stringent UK & EU regulations to ensure safety of recycled materials being used in food packaging.

Following the event, KTN’s Materials Team were on hand (proudly wearing their MaDE t-shirts) to provide advice to budding designers in the exhibition on topics ranging from ceramics to polymers and everything else in between. The team noted several key themes which emerged at New Designers, with plenty of young innovators making use of melting down plastics, for instance in furniture design and modular systems. The most common theme was around sustainability, particularly the re-use of plastic. The event was a fantastic opportunity for young designers to showcase their innovations and a wonderful showcase of how greater circularity and re-use of materials, in conjunction with innovative design, can lead to the creation of ground-breaking products, including solar cells, recycled bicycle seats and more, with many innovations edging closer to commercialisation.

You can watch the full event back here.

Become
a Member
of UKCPN